Why are cells currently counted with slides? How many times are the slides typically used and what happens to them after they are used?

Until recently, cells were typically counted on a reusable quartz hemocytometer. With the advent of automated cell counters 12-15 years ago, disposable slides became widespread. This was primarily a way for these cell counters to load and count slides. While they are convenient for automated systems, they introduce an additional ongoing cost for labs, and the single-use plastic also has a significant environmental footprint.

Each slide is designed to only be used once. There might be two counts per slide, but they’re all single-use and are routinely disposed of after use. We’ve heard stories of people trying to reuse single-use slides; however, for the sake of accuracy this isn’t recommended by slide manufacturers. It also adds significantly to the hands-on time required to count cells.

How does the CellDrop eliminate disposable slides? Where are the cells kept and how is complete cleaning achieved between runs?

To improve this system DeNovix combined the best of the old and new, replacing plastic slides with two permanent, optical grade sapphire surfaces. The surfaces are positioned parallel to one another by a high precision screw to form a chamber analogous to a traditional hemocytometer. The core technology is adapted from our DS-11 Series of microvolume spectrophotometers and users are immediately familiar with the load, measure and wipe clean workflow.

Researchers dispense the cells into the chamber, press count and the analysis is performed automatically. Afterwards, the sample is simply wiped away with a dry laboratory wipe and the CellDrop is ready for the next sample. One of the great features of the CellDrop is a large, high-definition screen with a live preview of the measurement chamber. This allows the user to instantly confirm that the surfaces are clean. 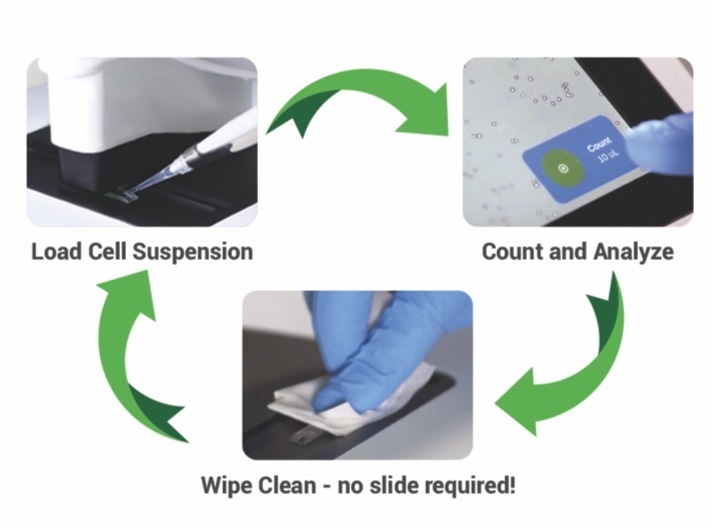 How does the performance compare to slide-based cell counters?

The slide-based counters use plastic slides that introduce inconsistencies between counts. For example, if a researcher has 10 plastic slides, there will be 10 slight differences between each of the slides. The CellDrop system uses a solid sapphire surface that is consistent each time it is used, and the chamber heights are automatically calibrated every time the instrument is turned on.

It’s very reproducible run to run. In addition, cell counts on CellDrop are very fast compared to other automated counters, so there’s a real performance upgrade in the user experience. 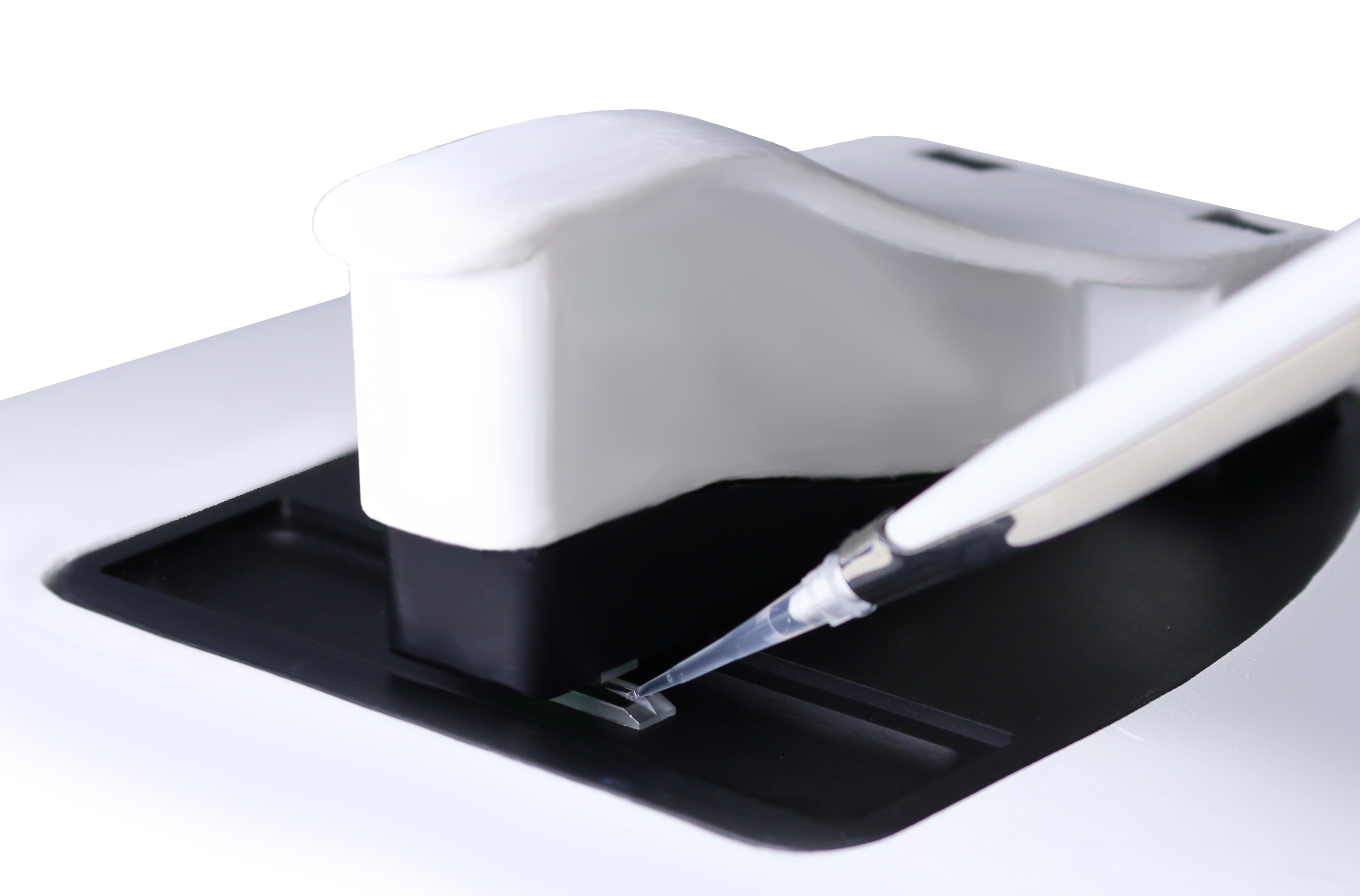 What applications does the CellDrop work with?

Our main applications are currently in cell viability, i.e. live/dead counts for mammalian, yeast and insect cell culture. There are two models of the CellDrop available—dual fluorescence and brightfield, or brightfield only.

For brightfield viability measurements, scientists use a dye such as Trypan blue to stain cells. Trypan blue has its limitations, so for labs requiring greater specificity and accuracy as well as a greater range of applications, we recommend the use of fluorescence. The CellDrop can use common fluorophores such as Acridine orange and Propidium iodide (AO/PI), where the fluorescent AO stains live cells green and PI stains dead cells red.

Using this completely takes the guesswork out of counting live/dead cells or counting primary cells in samples that are potentially contaminated. For example, it avoids counting red blood cells or other bits and debris that a typical Trypan algorithm or manual counting might confuse for a cell, which leads to an inaccurate count.

You can also analyze GFP tranfected cells with CellDrop, providing the percent viability and transfection efficiency. The platform is designed to be open to a wide range of applications across cell biology but also environmental, food and brewing industries.

Can the CellDrop be used with hazardous and infectious samples?

There are two ways to handle hazardous or infectious samples with the CellDrop. First, we designed it to sit in a biosafety cabinet. Researchers with bio-safety level 2 or bio-safety level 3 lab can put their CellDrop directly into the hood where they are dealing with hazardous cells.

Research continues as normal, using a typical cleaning protocol on the CellDrop after the cell samples have been counted. For example, if 10% bleach is used to sterilize the equipment and area used, this can be sprayed on a paper towel to wipe down the CellDrop after use.

We also allow for the use of disposable slides within the CellDrop for the purpose of infectious or hazardous material. If there’s a sample that for whatever reason a lab really doesn’t want to touch the CellDrop directly, a range of slides from different manufacturers can be used.

In this case, the researcher would put the slide on top of the reusable surface and then focus on the cells on the slide, count it, and then throw it into the hazardous waste without the sample ever having touched the CellDrop.

What software and algorithms/AI come with the CellDrop cell counter? How do these help scientists?

DeNovix software is designed by life scientists for life scientists. We work hard to make the software not only intuitive to use, but also very powerful. Researchers can quickly count and analyze results immediately on board the instrument. The counting applications and all of the embedded algorithms are preinstalled on CellDrop counters, so there is no need for additional tablets, computers or cloud-based software.

Within each counting application, we’ve included a default protocol that works well for most common cell lines. Customers can easily optimize settings for different cell types and then save those in protocols for additional counts. Results are saved onboard for easy retrieval for re-analysis or audit purposes.

What limitations are there for the CellDrop system?

The system was engineered as a cell counter. So like any optically designed instrument, there are resolution constraints due to the physics of the system. We can reliably count cells down 4 microns and there really are no limitations compared to what you can do with a manual count or a different automated cell counter.

We’ve designed it to provide the best of both worlds—the speed of automation but without the additional cost and inconvenience of disposable slides. If you need single-use disposable slides for any reason the CellDrop can accommodate that, but it also gives researchers the flexibility to use a reusable system for the majority of research they run.

What does the future hold for DeNovix Cell Counters?

We will continue to expand the applications and functionality of the CellDrop with our free software updates. We work closely with our customers and already have some great ideas that we are planning to implement.

More broadly, DeNovix is going to continue to look for places where we can innovate to save customers’ time and money and reduce pain points in the lab. We like to simplify instrumentation and provide tools scientists would like to have but that are not cost-effective given the current technology or need to buy into a new consumable stream.

Where can readers find more information? 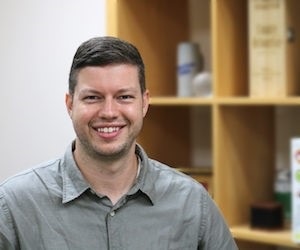 Dan joined NanoDrop Technologies Inc. in 2006 while completing his BS in Biotechnology at University of Delaware. After contributing to the development of the NanoDrop 8000 and NanoDrop 2000 Dan accepted a teaching and research assistantship at Villanova University.

Dan then moved into a research assistantship role at the University of Pennsylvania where he performed high throughput genetic screens to discover novel immune system pathways that regulate pathogenesis in insect born viruses before joining DeNovix in 2013. He has an MS in Immunology from Villanova University.